Many years ago, John came to my house for his birthday supper. After a three-course meal, John never left.

I have Nigel Slater to thank. The first meal I cooked for John was a simple hot prawn starter followed by Nigel Slater’s lamb shanks, slow cooked in red wine with whole grain mustard and lots of garlic and rosemary. The dessert was also a Nigel Slater recipe, a strawberry mascarpone tart.

John is a coeliac and gluten free cooking was a new concept for me. It wasn’t that difficult to adjust most dishes but it did involve reading labels very carefully. It almost meant that I made a lot of my own sauces for pasta from scratch, and pesto too.

A few weeks after I started cooking for John, he happened to notice a grater on the side in the kitchen. He asked me what it was for. I was slightly perplexed by this question as I did think most people would recognise a grater and be aware of the concept of grating cheese. At this point it turned out that John doesn’t eat cheese. I had been adding Parmesan to the pesto that he had happily eaten.

Despite a few cooking hiccups along the way, John and I are happily married and I am still cooking for him. He still doesn’t eat cheese though, but that means more for me. 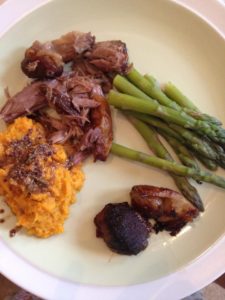 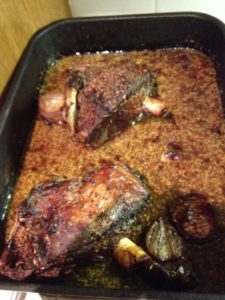 We use cookies on our website to give you the most relevant experience by remembering your preferences and repeat visits. By clicking “Accept”, you consent to the use of ALL the cookies.
Cookie settingsACCEPT
Manage consent

This website uses cookies to improve your experience while you navigate through the website. Out of these, the cookies that are categorized as necessary are stored on your browser as they are essential for the working of basic functionalities of the website. We also use third-party cookies that help us analyze and understand how you use this website. These cookies will be stored in your browser only with your consent. You also have the option to opt-out of these cookies. But opting out of some of these cookies may affect your browsing experience.
Necessary Always Enabled
Necessary cookies are absolutely essential for the website to function properly. This category only includes cookies that ensures basic functionalities and security features of the website. These cookies do not store any personal information.
Non-necessary
Any cookies that may not be particularly necessary for the website to function and is used specifically to collect user personal data via analytics, ads, other embedded contents are termed as non-necessary cookies. It is mandatory to procure user consent prior to running these cookies on your website.
SAVE & ACCEPT
Cooking For John